DAS-NAG is a transnational project co-funded by Regione Toscana (Italy) and the company WeSI Geotecnica Srl within the framework of funds for regional development (FESR). The scope of the project is to demonstrate the benefits of geotechnical numerical analysis in the geotechnical design process. DAS-NAG is the acronym of Data Acquisition System and Numerical Analysis for Geotechnics. DAS-NAG main focus is the definition of design procedures based on measurements obtained from an instrumented field test and on the use of its measurements for calibrating and validating the numerical models. The method has been validated for two important classes of geotechnical engineering problems: stability of natural slopes and stone columns as ground improvement technique.

WeSI Geotecnica has been network coordinator and italian partner of DAS-NAG workgroup. The second partner in DAS-NAG is the company Soilteknik A.S., based in Adana, Turkey. The main task of Soilteknik is the installation of stone column test field and related measurements.

Select the DAS-NAG topic form the selector below.

In engineering practice slope stability problems are often addressed by simplified approaches, namely assuming a predefined shape for the slip surface and evaluating the safety factor along that set of surfaces. The lowest factor of safety is then assumed as the degree of safety of the slope, and the corresponding surface is the expected failure surface. Although this simple method is widely used in engineering practice, one has to realize that the underlying assumption of predefined slip surface is not always safe.

In recent times, numerical analysis has overcome the limits of traditional approaches by removing the need for a predefined failure surface thus identifying the lowest factor of safety as calculation result, keeping as input the geometry of the slope and the mechanical properties of soil strata.

Furthermore, by including unsaturated soil mechanics in the calculations it is possible to explain and model the initial conditions of natural slopes whose equilibrium could not be explained in the framework of traditional (saturated) soil mechanics unless unrealistic (and extremely unsafe) high values of cohesion are assumed.

A three dimensional slope stability analysis has been performed to locate the most critical 2D cross section to be analyzed separated with a more sophisticated options such as involving the transient water flow and suction variation in time and how it would affect the stability of the slope at that critical section.

Numerical analyses were carried out in plane strain conditions accounting for partial saturation. The Soil Water Characteristic Curve introduced to describe hydraulic parameters of the groundwater flow in unsaturated zones is the one proposed by Van Genuchten (1980).

The upper boundary of the slope has been exposed to infiltration rate equals to 85% of the saturated permeability of the slope upper soil layer. The infiltration is due to a theoretical continuous rainfall event of 15 days. Negative pore water pressure (suction) decreases with time and the wetting front is advancing in slope layers turning a wet unsaturated layers into a fully saturated layers. This has great consequences on the stability of the slope as it is losing it apparent cohesion contribution to the total cohesion, triggering the failure of the slope. 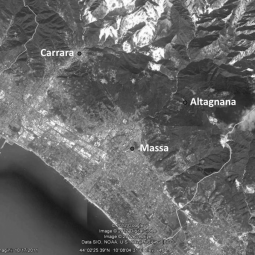 Evolution of Factor of Safety 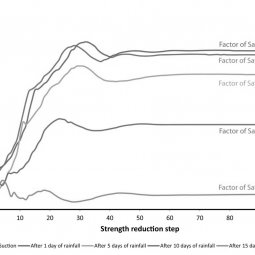 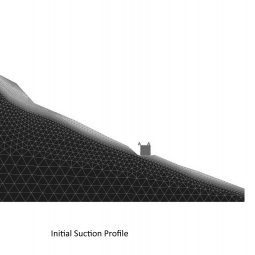 Soft soils show high compressibility and low shear resistance. They include a large variety of materials ranging from silts and clays of recent deposition and soils with high organic content.

Ground improvement is the most effective way for limiting total and differential settlements when building on such soils. Ground improvement techniques require preloading, often in combination with prefabricated drains installed to accelerate primary consolidation process, or methods based on rigid or semi-rigid inclusions. Such stiffening inclusions can be realized by in-situ mixing of existing soil with some binder (deep stabilization, deep mixing), by installing floating piles (creep piles) or by constructing vibrofloated stone columns. The affordable cost and the relative simplicity of construction make stone columns a very effective ground improvement technique. 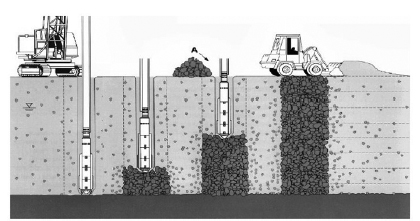 The state-of-the art of design of ground improvement by means of stone columns is based on semi-empiric approaches such as those proposed by Balaam & Booker (1981) and Priebe (1986). Main limitations of such methods are in the simplifying assumptions for geometry and soil behaviour.In the past, methods based on 2D numerical analysis have been proposed. However, such methods require a high degree of simplification with respect to the stiffness and strength of the system soil-column as a whole. These limitations result very often in overdesign or poor performance.

A field test has been set near the turkish city of Adana, where a group of vibrofloated stone columns was installed. The subsoil is mainly clayey and silty down to a depth of about 11 metres, then a stiff rock boundary is encountered. First of all, a single stone column was installed and subjected to a load test to calibrate the mechanical parameters of the soil-column interface. Thereafter, a group of 7 stone columns was installed and a distributed load of 50 kPa has been applied to the concrete slab built on top of the group. A monitoring system has been installed to measure vertical and horizontal displacements, pore water pressure and the pressure distribution between column heads and surrounding soil. The whole set of measurements is being used as reference for the validation of numerical analysis results.

The single column was subjected to vertical load test to analyze the mechanical properties of soil-column interface. The load was applied via hydraulic jack applying a pressure between the column head and a reaction metal frame anchored to the ground by two reaction columns. The results of the load test are shown in the load-displacement curve below.

For the field load test the group of stone columns was installed as shown in figures. Loading started after the installation of monitoring system, consisting in pressure cells, inclinometers and piezometers. A monitoring system constituted by inclinometers, pressure cells and piezometers has been installed in the field of Adana. In the following pictures the different phases of installation are presented. 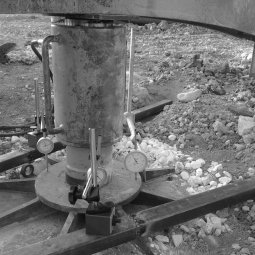 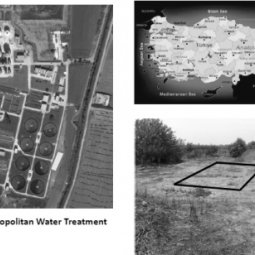 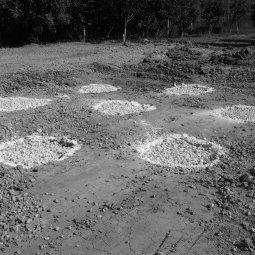 This Research & Development project highlights many important engineering issues that should be considered in the daily engineering practice. They can be summarized as :

1- Installation effects
The initial stresses have been taken into account by simulating the installation effect as a cavity expansion then deriving the resulted K0 values. This procedure is considered to be superior in comparison to the use of empirical correlations.
2- Fineness of the Finite Element mesh
The fineness of the used Finite Element mesh is a very crucial issue to be considered to converge to a correct solution. An inadequate number of Finite Elements leads to a considerable error in the prediction of the system deformation.
3- Creep effect
The results show the obvious effect of creep in terms of additional settlements and the evolution of the improvement factor in time. Thus, it is highly recommended consider the creep potential of subsoil in engineering design.
4- Stone column material
Numerical results show high sensitivity to the stiffness and strength properties of the filling material used in the stone columns. It is highly recommended to have fair estimates of these properties in each project. These properties should be provided in the material report to the designer, as they turned to be on equal level of  importance as the properties of the soil layering itself.

1- Careful use of soil cohesion
On using the slices method, one should be very careful in choosing the strength parameters of the soil. In particular the choice of soil cohesion value. To be on the safest but yet very conservative side one should use the intrinsic cohesion derived from laboratory tests on a fully saturated soil.

2- Carefully locating the critical section of a slope
The three dimensional modeling of the whole slope topography is a very powerful tool that allows a more accurate determination of the most critical section of the slope in terms of safety. It is a highly recommended procedure in case of slopes of special importance.

3- Suction effect
The role of soil suction should be gradually incorporated in the daily engineering practice. The shady understanding of its contribution to total soil cohesion could lead to unfavorable results. To this end the advanced numerical analysis offers a nice tool to accurately predict the evolution of suction in time and how that would affect the global stability of a slope. 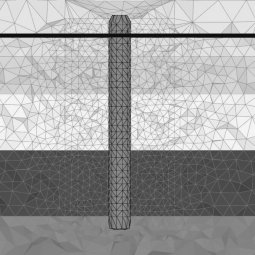 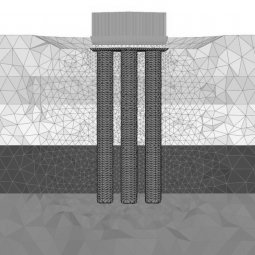 Here you can find high resolution posters of both slope stability and stone columns project. Feel free to email us if you need further information. 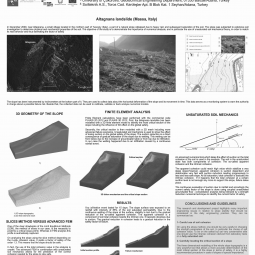 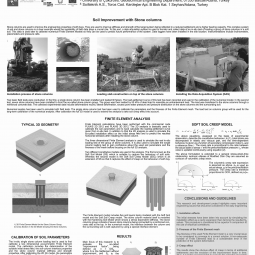